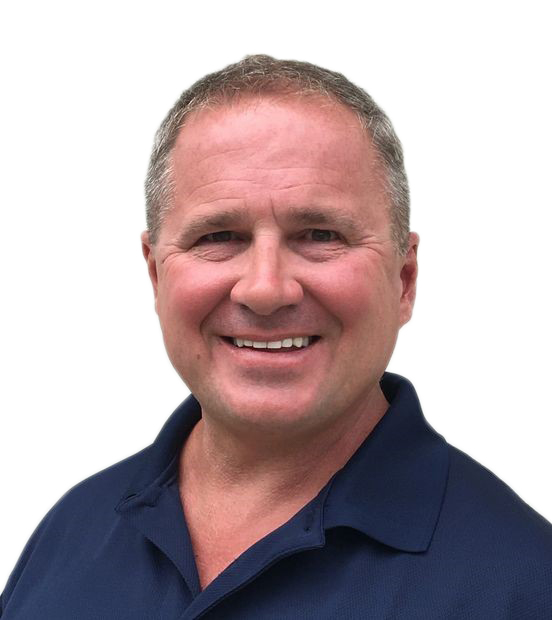 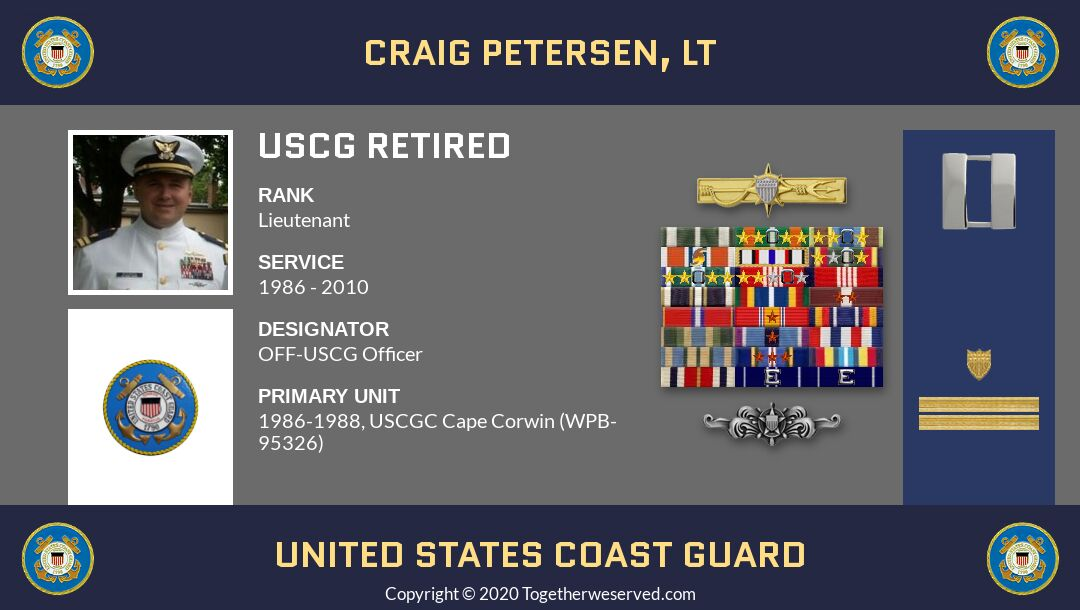 Lieutenant Craig Petersen is a native from Everett, WA and joined the Coast Guard in 1986 as a third generation “Coastie”. After recruit training in Cape May, NJ, Seaman Apprentice Petersen was assigned to the 95-foot patrol boat USCGC CAPE CORWIN in Maui, HI. After attending Machinery Technician School in Yorktown, VA, he was assigned as a Third Class Petty Officer on the USCGC IRIS, a 180-foot World War II-era buoy tender in Astoria, OR.

After promotion to Petty Officer Second Class and the end of his four year enlistment, he attended college and joined the Coast Guard Reserves. His assignments in the Reserves included the 172-foot pre-World War II-era buoy tender USCGC FIR as well as the 180-foot buoy tender USCGC MARIPOSA in Seattle, WA, Coast Guard Station Bellingham and then to Marine Safety Office Puget Sound in Seattle, WA where he found his love responding to oil spills.

Lieutenant Petersen took a demotion to Fireman in order to join the active duty Coast Guard again in 1995. His first assignment was to Marine Safety Office/Group Portland, OR. Eight months later he was promoted back to Petty Officer Third Class with an assignment to Marine Safety Office Cleveland, OH. He met and married his wife Liz and their daughter Samantha was born there and he was promoted to Petty Officer Second Class. As a collateral duty petty officer, he was assigned to Port Security Unit 309 and deployed to Troia, Portugal for an international NATO naval exercise. He applied for and was accepted into Officer Candidate School in 1999 but was medically disenrolled. He then changed rates from Machinery Technician to Marine Science Technician in order to stay in the environmental field but had to be demoted down to Petty Officer Third Class.

His next assignment was back to Marine Safety Office Puget Sound in Seattle, WA. During this four-year tour, he was promoted to Petty Officer Second Class as well as to Petty Officer First Class. In addition, he completed his Bachelor of Arts in Environmental Studies from Cleveland State University and began working on his Masters in Environmental Policy and Management at the University of Denver. With this tour completed, he was assigned to Marine Safety Office Buffalo, NY.

Lieutenant Petersen applied for and was accepted into the Direct Commission Officer program as an Environmental Manager. He was promoted straight to Lieutenant skipping Ensign and Lieutenant Junior Grade. His first assignment was to the Office of Environmental Response at Coast Guard Headquarters in Washington, DC. While there, he was assigned to FEMA Headquarters and responded to Hurricane Katrina as well as finished his Masters Degree. In 2008, he received orders back to Seattle as the Incident Management Division Chief at Sector Seattle, WA. He retired in December, 2010 after 24-years of service and began work as a manager at a local coin shop.

THE FUTURE OF NUMISMATICS. NOW.

The Oceanside Coin and Currency Vision:

Oceanside Coin and Currency strives to become the leading global supplier of numismatic and precious metals assets and services by delivering the most personalized, comprehensive, and integrated client experience in the industry.

The Oceanside Coin and Currency Mission:

We strive to achieve our ultimate vision by ensuring that every action fulfills our multi-dimensional mission:

To build and preserve wealth for clients through creation and management of thoughtful tangible asset investment portfolios that compliment other avenues of investment.

To provide expert consultation services to individuals, families, businesses, attorneys, and financial organizations on all matters of numismatics and precious metals.

To source numismatic and precious metals assets from individuals and organizations committed to ethically and legally sound business practices.

To redefine the numismatic and precious metals ownership experience through the introduction of novel strategies and technologies that meaningfully engage the next generation of collectors.

To uphold the integrity, viability, and transparency of the numismatic and precious metals marketplace.

To preserve specimens of numismatic antiquity to permit their study and appreciation by numismatists and all people of the world for now and into the future.